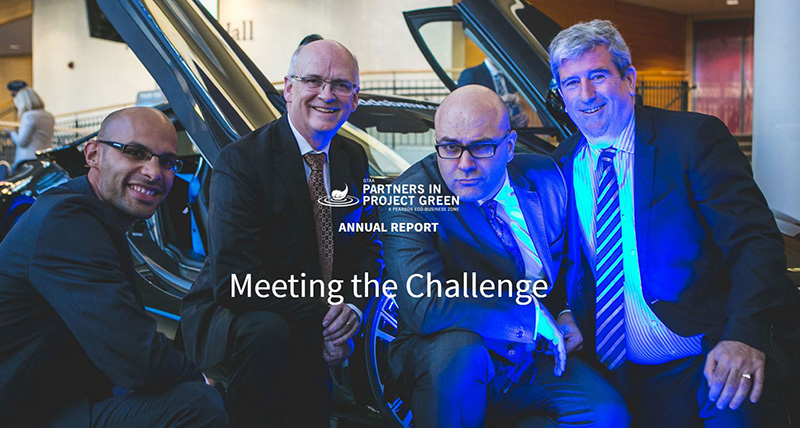 A MESSAGE FROM OUR CO-CHAIRS

The year 2015 may well be remembered as a decisive one in the global effort to confront climate change.

In December, the Government of Canada joined with more than 190 other countries in approving an historic accord to limit worldwide greenhouse gas emissions.

Earlier in the year, right here in Ontario, the provincial government made a series of moves signaling its commitment to the fight: joining with California and Quebec to introduce plans for a cap and trade carbon pricing system, setting an ambitious mid-term greenhouse gas reduction target for 2030, and launching a $325-million Green Investment Fund to support the transition to a low-carbon economy.

For businesses, both here in the GTA and across the country, the challenge is immediate — and immense: to make strict reductions in fossil fuel use, or put in place technologies to cut emissions drastically.

The members of the Partners in Project Green community are uniquely well-equipped to meet this challenge.

Founded in 2008 under the leadership of Toronto and Region Conservation Authority (TRCA) and the Greater Toronto Airports Authority (GTAA), this large and growing network of private enterprises, institutions and municipalities embodies a belief that collaborative effort among like-minded organizations is the best way to address the urgent need for innovation in sustainable business practices.

Partners in Project Green’s results for 2015 — summarized below — speak to a simple truth: we are all stronger, We are more effective and we can achieve so much more when we choose to work together. Whether it was the members of our Energy Leaders Consortium pooling knowledge to help one another achieve emissions reductions, or the competitors in the People Power Challenge striving to best one another’s employee engagement efforts, our community demonstrated again and again last year just how powerful a tool collective action can be.

In 2016, the battle to deal with the climate change crisis is well and truly joined. Through collective projects, information-sharing and peer-to-peer learning, the Partners in Project Green community will continue its leadership role, embracing the twin challenges of adaptation and mitigation, and driving the search for new sustainable business solutions.

We welcome your participation and your contribution.

Since the emerald ash borer made its first appearance in Ontario in 2002, this invasive insect species has destroyed millions of trees. How to dispose of trees infested by the voracious beetle in a way that minimizes waste and greenhouse gas outputs?

Determined to help turn this ecological tragedy into a success story, Partners in Project Green has worked with municipalities and other members of its community to develop a sustainable solution: repurposing infested ash trees into valuable wood products.

In January, City of Toronto became the first GTA municipality to step up, launching a repurposing pilot project at its Nashdene Public Works yard in collaboration with Partners in Project Green members Sawmill Sid, Weston Forest Products and Torxx Group. By late summer of 2015, City of Markham and Town of Richmond Hill had commenced pilots of their own.

Partners in Project Green created its Energy Leaders Consortium (ELC) with the goal of making it easier for community members to maximize their energy efficiency by learning from their peers. Now in its third year, the ELC program is all about bringing businesses that excel at energy management together in one room, and giving them the opportunity to share insight, expertise and best practices.

RESULTS:
3,330 tonnes of eCO2 avoided
Equivalent to the annual emissions of 708 automobiles

Community is at the heart of everything Partners in Project Green does. We believe the best way to advance the goals of sustainability and resilience to climate change in the Pearson Eco-Business Zone is by bringing municipalities, businesses and institutions together to pursue common purposes.

Nothing embodies this spirit better than our Spring Planting, an annual event that brings out members of the Partners in Project Green community to help add a little green to local watersheds. This past May, hundreds turned out, from organziations such as Air Canada, Bentall Kennedy, Bosch, Ontario Natural Food Co-op and Toronto and Region Conservation Authority (TRCA), to lend a hand in restoring Etobicoke Creek.

Participants planted a variety of native trees and shrubs around the stormwater pond at Secretariat Court in Mississauga, enhancing an important parcel of green space within a largely industrial area. The vegetation will provide a habitat for local wildlife and help buffer contaminants carried by stormwater runoff.

Partners in Project Green presented the 2015 Spring Planting in co-operation with Credit Valley Conservation and TRCA. The event was sponsored by Air Canada and Bentall Kennedy.

The health of a community depends greatly on the sustainable management of its water resources — especially now that so many municipalities are grappling with the potential impact of climate change-related extreme weather events on aging infrastructure.

Partners in Project Green strives to make a difference by working with community members to develop innovative new water projects designed to reduce the burden on the municipal stormwater and water treatment systems. In 2015, the first pilot was completed: a rainwater harvesting installation at Scarborough furniture manufacturer Calstone Inc.

The project incorporates a massive 9,300-litre tank for collecting rainwater, along with a trench and two ponds for infiltration. The captured water, diverted from the local storm sewer, helps to irrigate a host of newly-planted native plants, shrubs and trees on the site.

Members of the Partners in Project Green community enjoyed the opportunity to check out the rainwater installation in person, as our “Let’s Get Nosey” bus tour in June made its final stop at Calstone for a guided tour, followed by a celebration of the project’s completion.

So you’ve committed your organization to an ambitious sustainability program: reducing greenhouse gas emissions, managing waste and water responsibly. To reach these goals, you’ll need to leverage your most important resource: your people. How?

Getting employees engaged is a major hurdle for organizations when it comes to greening their operations. That’s why Partners in Project Green created its People Power Challenge — an annual competition in which companies and institutions across the Pearson Eco-Business Zone duke it out for sustainability bragging rights.

A dozen organizations from the Partners in Project Green community took part in the 2015 challenge, with top honours going to Velcro Canada in the Large Enterprise category and Bentall Kennedy in Small-to-Medium Enterprise. Toronto Zoo and The International Centre were the respective runners-up. The winners were revealed at our Fall Networking event in October.

Over 24 weeks, competitors racked up points by getting employees involved in finding ways to introduce sustainable practices — from organizing lunch-and-learns and bike-to-work days, to reducing office paper waste.

The People Power Challenge returns, bigger and better, in 2016.

NOVEMBER: Campbell Company of Canada completes commissioning of a 4.6 MWe cogen system that will supply more than 90% of the electricity and steam for the company’s Toronto plant.

The Electric Vehicle (EV) revolution is coming. By committing $20 million to build public charging stations across the province, Ontario has signaled that promoting EV adoption will be a key component of its strategy to reduce greenhouse gas emissions to 80% of 1990 levels by 2050.

Building the necessary infrastructure is essential to getting more EVs on the road. In 2014, Partners in Project Green began working with stakeholders from the Pearson Eco-Business Zone community with the goal of creating the largest open electric vehicle charging station network in the region.

By the end of 2015, 15 organizations had installed a total of 80 charging stations. Innovative “smart” technology allows stations to communicate in real-time with a driver’s navigation device, making them easy to find and use.

In November, Mississauga Mayor Bonnie Crombie was on hand as Partners in Project Green Ambassadors Orlando Corporation and Plug’ n Drive, along with Eco-Solution Provider Autochargers, unveiled a major addition to the network: 24 new stations at the Heartland Outlet Mall, the single largest deployment of EV infrastructure in Canada.

RESULTS:
6.5 tonnes of eCO2* avoided
Equivalent to the energy use of an average house for 183 days

DECEMBER: Ontario NaturalFood Co-op launches a “Detailed Energy Audit” program that is expected to result in 265,794 kWh of energy savings, for a $28,000 reduction in the organization’s utility costs.

DECEMBER: The International Centre earns the Hotel Association of Canada’s Green Key Meetings Hall of Fame Award of Excellence for its sustainable practices.

DECEMBER: Toronto Pearson completes commissioning of a 4.6 MWe cogen system that will supply more than 90% of the electricity and steam for the company’s Toronto plant.

Get the scoop! See our latest newsletters and subscribe.